I have been silent. Silent for far too long. I have observed the uprisings in the US and the solidarity in so many other countries, and felt paralized. Seeing and learning more and more about the pain that so many black people go through on a daily basis. Seeing that even if I think that I’m not directly involved in any brutality, I am still contributing to the problem. Connecting with the feeling of guilt, but reminding myself that I can’t fall into feeling bad for myself. Connecting to my feeling of shame, and reminding myself that it is important to feel those feelings in order to address them. And again: feeling them. accepting them. but not fall into self-pity and victimization. Not turning it around to have the attention back on me.

I recently read a comment of a white man who didn’t understand the issue. Who said to stop saying “but what about me?”, and in the same breath pointing out how bad it is for some white people (which is basically a “but what about me?”). And yes, it is most likely true, that there is a group of white people, even white men, who got dealt a bad hand and who are struggling. And noone wants to take away from their pain. They feel blamend and not seen. But the way I see it, this is also part of the problem. All of us, who haven’t learned to truly feel and stay with our feelings instead of pushing them down or deflect them.

But I’m digressing… I haven’t been on the recent demonstrations. I haven’t spoken up nearly enough about the issue in the past. I have mostly been silently observing on the sidelines. And I feel shame around that. And the longer I’m silent, the more shame comes up. I have been observing my own patterns and prejudices around that topic for quite some years now, and I have to admit:

I’m still racist. I don’t want to be. I want to learn and I think I am improving. But there is just so much that I don’t know about, and simply do out of unknown ignorance. But I can’t allow myself to fall into the guilt-trap for all the mistakes I made.

The issue is not that we “privileged” people are told that we ARE wrong, but simply that we DID something wrong (to learn more about the difference, check out Brené Brown’s TED talk). No matter if we know about it or not. And that we can change our actions. That we have to, if we want something to change.

We can acknowledge all the awful things that our ancestors, our grandparents, our parents and we ourselves did. We didn’t know better then. We need to appologize for that. And we need to change, learn and do better NOW. And the next day and the next day. I can’t change history, but I can make damn sure, not to be part of it repeating itself.

This text will probably (sadly) only be read in its intirety by people mostly agreeing with me. But it needs to be shared anyway. Every voice counts. I see a friend of mine from Minneapolis posting a lot of information on the issue, and I am thankful. I do agree with all of it, but there is still so much more that I can learn. So many small things that will most likely feel uncomfortable to look at and really feel in its entirety. Accepting that even we, who say we stand for equality, who think of ourselves as good people, are still racist. Because we have not learned another way. But we are conscious and empowered adults, and we can start to learn. Can continue to learn about those issues. Not point at all the others who are even worse racists than we are.

As women we want the men to get how we feel. To see our side. Wondering how the hell they can be so blind. But it needs people to show them. And it needs people willing to acknowledge that they have a blind spot and are willing to learn about it. So here I stand. bare. in my cloak of guilt and shame. humbled. ready to listen. ready to learn. ready to feel all of the uncomfortable feelings around my privilege.

It’s one thing to say that we know that we are privileged. It’s yet another to really see the whole picture and acknowledge the feelings that come up when we truly allow them to penetrate us. To look in all the nooks and crannies for the things we don’t want to see or acknowledge about us.

In the beginning, for example, I thought that this is a problem of the US, and Austria is different, so I can’t really relate. But I was reminded of my ignorance yet again. There are more than enough cases of unwarrented police brutality and murder of innocent black people here too. It might look like so much less, but this is mostly because of our country’s size and the ratio of white and black people living here. It’s just less dominant and easier to look away. But that doesn’t mean it’s not here.

These things come up especially in situations where we are afraid or feel insecure. Then, we need to be open and honest with the thoughts that come almost as a reflex. The thoughts that come, before our rational brain kicks in and tells us that we are good people and that we don’t really think that after all. But we do. I do. You most likely do.

This is a bold statement, and I’ve never taken a strong stand on any topic so publicly. But it affects us all. And it so strongly connects also to my main message to be open and honest to ourselves and to others. Truly, radically, unapologetically honest. That’s the most important step to transform our lives, our society, the planet to be more connected, loving and inclusive to everyone.

Addendum: And to people who want to argue if it is racism or ignorance. Or that want to discuss small details of my words: I invite you to look at yourself first. What is it that you don’t want to see on this topic? Why do you want to distract from the main issue? And the answer might be painful to admit. You might not want to see it. And it’s okay to have resistance. The important thing is to be courageous enough to stick with the question, even if there is no answer yet.

And to end it, just a little food for thoughts… 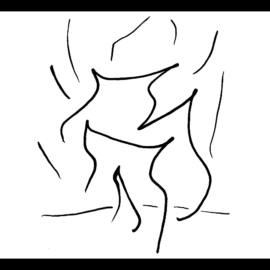