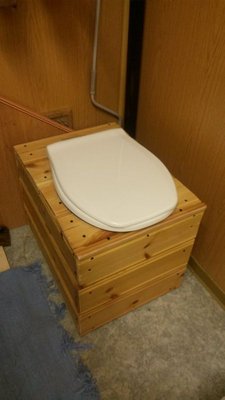 After sleeping in my new little house for two nights in a row, it became apparent pretty soon that the next thing before really moving in had to be the composting toilet. There is a house right next to my new home where I can use the toilet, but it’s winter, and I do want to have some luxury…

I found some leftover wood in the attic so I started to build my wooden box for the toilet. The separating toilet seat I had already ordered and received months ago from Separett .

So I started to build the box for the toilet. I’m sure that any carpenter would be horrified by the way I did it, but being pretty or doing it the “correct” way was not high on my list of priorities. I just wanted it to be stable and do the job. First, I built the frame. After that, I just screwed on the leftover wooden plates on all sides but the top. I thought about building one side to be like a door, but then decided against it (out of laziness probably) and try it with just the hole on top. The tricky part was the hole for the ventilation shaft and the hole for the toilet seat. I didn’t want the seat to be moving around on top, but couldn’t make the hole too small because – since I didn’t build a door on the side – the bucket needed to fit through there. So it’s not especially pretty, but it should do the job. And that’s how it looked in the end: It’s all down the drain… or is it?